The first fully digital fashion week from one of the four fashion capitals just ended. Was it any good?

LONDON — This past weekend was always going to be unlike any London Fashion Week before.

There were no live runway shows. No front row, backstage beauty scrum or heaving photographers’ pit; no mouthy security on the door or street-style snaps taken outside gilded venues. With coronavirus travel bans and social distancing measures still in place in Britain, there were no big crowds. And with most brands continuing to struggle with the economic fallout of the global crisis, only a handful of the showcased collections were new designs.

The question was: Could a digital equivalent, watched from your sofa, ever be the same? 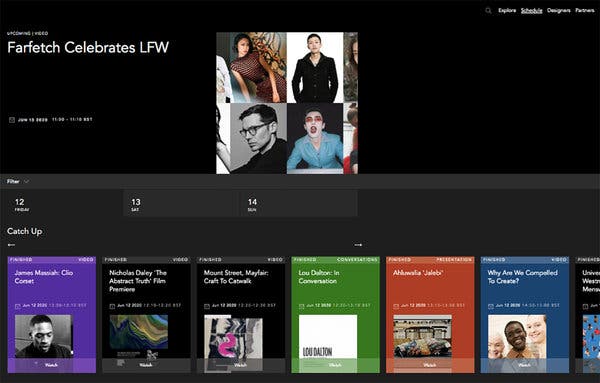 The British Fashion Council always acknowledged this replacement of what would have been the spring 2021 men’s wear shows would be an experiment as well as a reset. Still, the three-day affair, built on a Netflix-style home page with streamed events and new content created by brands, retailers, cultural institutions, media partners and students alike, was a bold effort given the circumstances. And, perhaps, the beginnings of a road map for where the concept and purpose of fashion week could go next — with or without a live audience.

Here is what we learned:
It wasn’t about the clothes.
This iteration of London Fashion Week functioned, like its physical counterpart, as a platform to celebrate fashion talent, and particularly the emerging talent for which the British capital is known. But this season, brands had to look for new ways to tell their stories.

Browsing the website, with its mix of mediums like video art and music playlists, photo retrospectives and designer Q. and A.s, felt like turning the pages of an interactive magazine or scrolling through an arty Instagram feed. Though there were pops of originality, the digital formula lacked a sense of urgency or the anticipation that grows while you are sitting and waiting for catwalk theatrics or a hot debut — whether in the audience or watching a livestream anywhere at all.

And because of social distancing orders and industrywide manufacturing delays, there wasn’t much actual fashion in sight.

There were few household names.
Given the industry turmoil caused by coronavirus, and that the shift to a digital format was only announced in April, the lineup lacked many of the bigger men’s and women’s wear names of the London fashion scene. With no Burberry, A-Cold-Wall or Victoria Beckham taking part, there was a palpable absence of star power — the charge that usually powers the showcases from the big four cities and gives them major commercial clout.

So, new talent took center stage.
On the upside, it was a chance for newer names to use some newer mediums to articulate some of the ideas that shape their usual approach to making clothes. Instead of her usual tailoring, the men’s wear designer Bianca Saunders unveiled a vibrant new zine, We Are One of the Same, that explored themes of gender identity, community and blackness, with prints that could be bought on her website. Nicholas Daley, an LVMH Prize finalist this year, presented a nostalgic short film of his fall runway show, held in January, with musical accompaniment by the jazz musicians Kwake Bass, Wu-Lu and Rago Foot. And Priya Ahluwalia held a virtual reality exhibition to celebrate the release of her new photography book, “Jalebi,” that allowed the viewer to roam around a gallery and click on information points to find out more about what it means to be a young mixed-heritage person in modern Britain.

Causes were the biggest trend ….
This year has forced fashion to rip up the rule book. So it felt fitting that at the last minute Charles Jeffrey canceled his plans to livestream a drop-in dance party on Saturday night and instead hosted a black talent showcase and fund-raiser for UK Black Pride.

Martine Rose collaborated with the poet and activist Kai-Isaiah Jamal to celebrate the release of a capsule collection that used deadstock fabrics from her studio. And Osman Yousefzada presented a moving short film called “Her Dreams Are Bigger,” which took clothes with “Made in Bangladesh” labels that had been bought in Britain back to their country of origin, where garment workers tried them on and envisaged the women who had once worn them.

… though who exactly was watching?
Because the platform was open to all, not just the industry and media, there was considerable excitement online in the run-up to this fashion week.

That isn’t something to ignore: Shanghai Fashion Week, which took place online in late March, reportedly drew 11 million viewers and sold $2.75 million worth of clothes and accessories direct to consumers during livestreams.

Retail, after all, is the reason that fashion weeks exist. And as stores are reopening in the West, fashion brands of all sizes need that potential support and audience more than ever.